Precise synthesis of custom oligo pools up to 200 nt with high-throughput cloning
into a vector of your choice. Ideal for CRISPR gRNA library constructs and much more.

Genome editing and gene editing techniques are increasingly being used in gene knockout and gene mutagenesis studies for engineering cell lines and mouse models. The CRISPR/Cas9 system in particular has been widely adopted to undertake gene knockout experiments in which a true knockout effect can be achieved in stable cell lines, as compared to traditional, transient and incomplete knockdown techniques such as RNAi. CRISPR technology is frequently leveraged for reversible gene knockdown, through CRISPR interference (CRISPRi) and gain-of-function gene knockin approaches are made possible by the CRISPR/Cas9 system as well. The precision and relative simplicity of the CRISPR gene editing system has enabled scientists to modify DNA quickly and efficiently in both engineered cell lines and mouse models, with a wide range of possible applications across research areas, target genomes, and industries. Gene editing has the potential to revolutionize genetic approaches to personalized medicine, and could enable a new era of gene-based therapeutic treatment options for heretofore untreatable diseases. 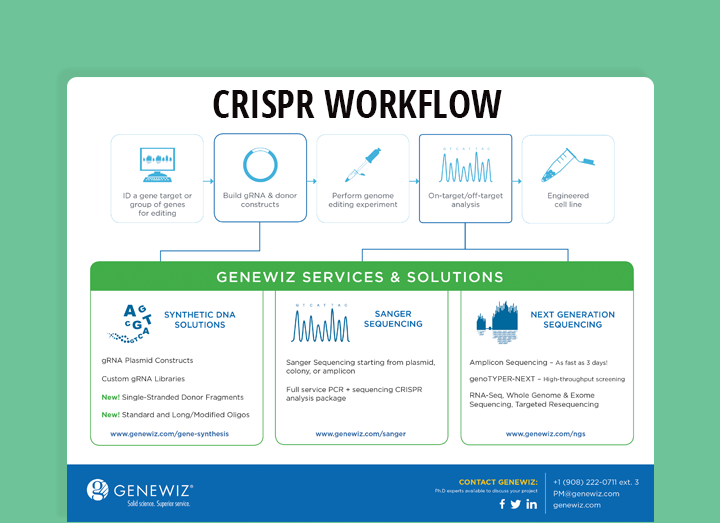 GENEWIZ is pleased to provide a number of services to expedite research in genome editing. The diagram below illustrates a typical CRISPR workflow and the steps within this workflow where GENEWIZ can help move your experiment forward.

Current examples of genome editing and gene editing applications in research include:

Outsource your CRISPR construct (both gRNA and donor construct) synthesis projects to the Gene Synthesis industry leader in quality and customer service. A variety of different synthesis options for CRISPR constructs are available, including:

GENEWIZ provides a variety of on-target and off-target validation approaches, leveraging both Sanger Sequencing and Next Generation Sequencing.